I recently bought a copy of a locally produced booklet called The Coal Canal Way – A Walkers Guide. You can buy yourself a copy from The Somersetshire Coal Canal Society or download a copy for free. It contains a series of walks which take you along the whole of the long disused Somerset Coal Canal – from the terminus at Paulton to where it joined the Kennet & Avon canal at Dundas. I’ve done this walk several times before without a guidebook, but am going to do it again following the suggested routes. As is my wont, I’m going turn them into a series of circular walks too.

The first two walks in the book, from Paulton to Radford and from Radford to Camerton, take me along paths I know inside out. I’ve walked this way dozens of times, for many years. It remains fascinating, however. The evidence of what a different place this area was in the not so distant past is everywhere. The coal canal was, for a time, an important connection to the Kennet & Avon canal for the coal mines of the Somerset Coalfield. You can read the history on the societies website. Suffice it to say, it was for a while a very busy operation, carrying 100,000 tons of coal a year.

The terminus is at Timsbury Basin, and it is still a prominent feature in the local landscape. These days it provides a home for ducks and a pair of swans and is very well used by dog-walkers. But it used to service a tramline from the collieries at High Littleton and Timsbury, as well as the local Paulton Engine.

A little further along is Paulton Basin, which is being gradually and lovingly restored by volunteers. The most prominent features are the large dry dock and the stone arch bridge. The past really does make its presence felt here.

The route is then along the towpath of the canal all the way to Radford. Not so long ago, parts of the section were restored enough to actually fill with water. There is a video of the slightly ramshackle occasion when it was re-opened on Youtube, which is worth a watch. The water is not there any more, but it is amazing that it was done at all. The section in my photo above was not part of the refilling and is not the most dramatic section, but I have always had a soft spot for it for some reason.

Of course, the other link with the past in this area is the remains of the Camerton Branch of the Bristol and North Somerset Railway, which ran from Hallatrow to Limpley Stoke. The path takes you through the site of Radford Halt, although there isn’t really anything left to see. It also takes you through the decapitated bridge shown in the photo above. This bit of the walk is interesting as the path goes directly through someones garden – but it is well signposted so it doesn’t feel too awkward. It is a really lovely garden too, but it didn’t seem right to take any pictures.

Before long, you arrive in Camerton. I did’t hang around on this occasion, returning home through the fields to the south. It was a gorgeous day and an interesting walk. Although the actual Coal Canal Way walks amounted to less than 2 miles, my total walk was a 6.5 mile round trip. 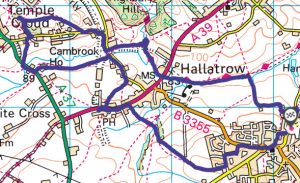 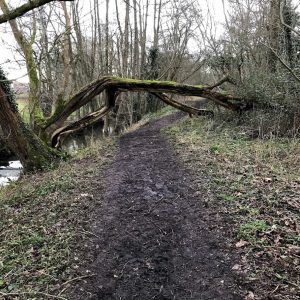 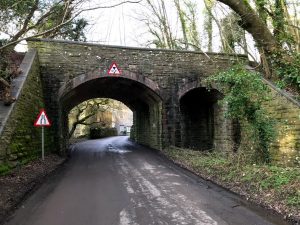 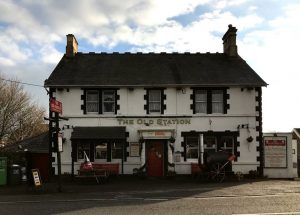